When we bought our house it had a new deck on it. It was a couple of years before we found someone to prep and stain it for us. We had considered using Behr stain; but after researching online, I really liked the reviews of TWP, Total Wood Protection. Here is what our new deck looked like after it had weathered: 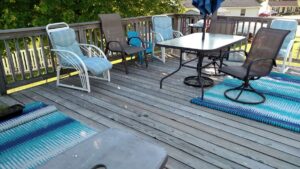 Here are some closeups of the green stuff that needed to be cleaned off. We did not have a pressure washer at the time. I was worried that since I wasn’t familiar with using a pressure washer, that even if we bought one that I would splinter the deck and then have to sand it. So we found a company to do it for us. 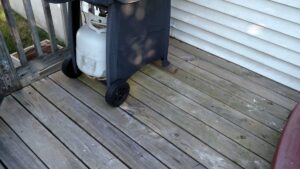 Here’s another closeup of what needed cleaned off of the deck. 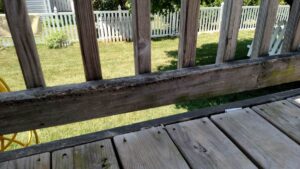 In preparation for the workers coming, I had to remove my climbing rose (Lady of Shalott from David Austin Roses) and support it with a ladder. I really hoped that my beloved rose would survive!

So the company came out and cleaned the deck. While pressure washing they used a cleaning solution of some kind that restored the whiter new look of the wood. 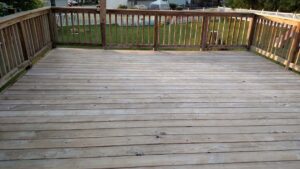 The owner had sent less experienced workers. I was very disappointed to see that they had splintered the wood, just like I had been afraid that I would do! Their cleaning solution had not gotten off the tough dirty parts, either.

Here is a view from a different angle. We had contracted to have all the lattice work stained, also. 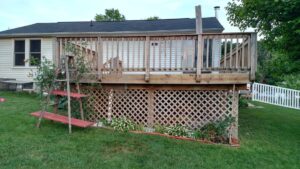 The staining process began, and my husband thought that the deck looked burned. It kind of did– but we got used to the dark black walnut stain. 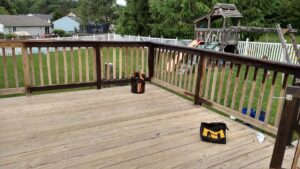 The company was supposed to cover all of the plants around the deck– but they were not very careful, as you can see in the picture below.

One of the reasons that I enjoy doing things myself, is because of bad experiences with contractors. We had hired contractors because the job seemed too big and overwhelming, and beyond our expertise since we had never done anything like it before this. Soon after, I realized that I could have practiced staining by staining our playset first. But it was too late. I ended up staining the playset with the leftover stain– and it wasn’t so hard after all. 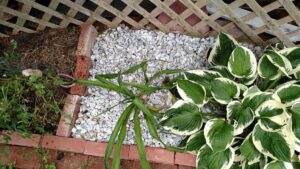 After sending pictures of the splintered wood, the owner had his workers fix it. But there was nothing he could do about the stain on the rocks and the plants. (They went out of business soon afterwards.)

I am happy with how my deck turned out, though. The Black Walnut stain looks great with my bright blue and aqua accents. My peach rose bush survived and is thriving. 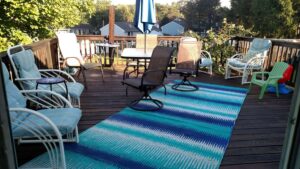 Here is the deck later on all ready for a party: 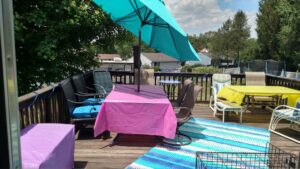 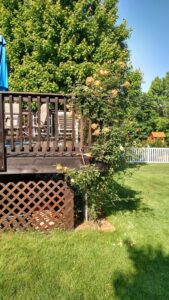