I had been wanting to do a dried hydrangea craft of some sort.  At first, I had no dried hydrangeas.   Last fall, the middle of the interstate median was full of them, but I knew it would be frowned upon if I stopped to gather a car full of them with vehicles whizzing past.   But I was tempted. : ).  Then one day when I parked at the library, I realized that there were some dried hydrangeas right in front of me.  I wasted no time going inside to ask if I could have them, and then if I could borrow some scissors. They gladly obliged and I was tickled to finally have the dried flowers.   Well, they were wet because it had rained a lot, but they dried out in the house in no time at all, without any mold or mildew problems.

After I acquired the hydrangeas, I didn’t know what I would do with them.  I waited all winter to spray paint them, just like I had waited with my Daylily Stems.

And then, it hit me— these would make a great Patriotic Bouquet!   I checked my spray paint collection, and was very happy to see that I already had red, white, and blue.  I even had Glitter, that I had bought for just such an occasion.  I hadn’t used the glitter yet. I also had a giant box, which helped contain the spray paint.  The weather was perfect– just the right temperature, and not windy.  Best of all, I was home alone and would not be interrupted!! 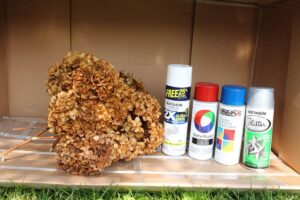 Do you decorate with dried flowers? I much prefer dried flowers to artificial flowers or silk flowers. I had only a few dried bunches of hydrangeas.  So I carefully planned out how I would spray paint them.  I wanted to test each color of spray paint, so I used a small bunch to try out each color.

Then I sprayed the glitter spray paint on them.  I decided that the glitter paint made the white look dark, and more of a gray.  So when I spray painted my larger bunches, I only used glitter on red and blue.  Again, on the large bunches, I carefully planned out which bunch I would spray red, white, or blue, according to how I wanted to arrange the colors in my vase.  I don’t always plan out things in such detail, but in this case I am very glad I did and super glad how it turned out.  It would have been sad to realize that I wanted to arrange the colors differently, and not be able to since I would not want to re-spray paint any of the bunches (what a mess that would be!). Here are the large bunches next to a small bunch that I left unpainted. 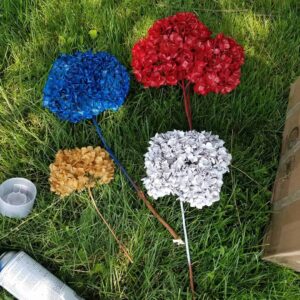 I was happily spraying away when I realized that I had spray painted my rings.  Oops! I snapped a quick picture and then headed off to use nail polish remover on the rings.  That worked just fine until I could get to the jeweler’s to have them cleaned better. 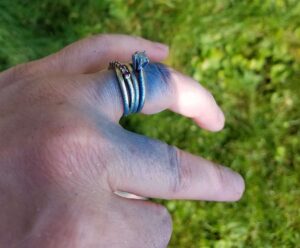 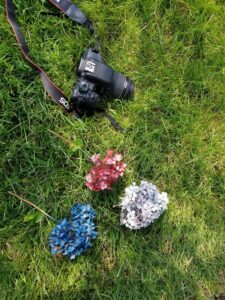 I wanted something white to hold my dried flower stems in place. I decided to pop some unbuttered popcorn in my air popper for the vase filler.  I thought it fit the fireworks look of the flowers.   I used a large glass cookie jar for the vase.  I saw that some people also call these apothecary jars. 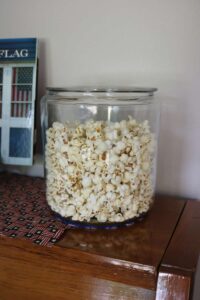 The popcorn held the flowers in place very easily.  Don’t the bunches look like bursts of fireworks?! 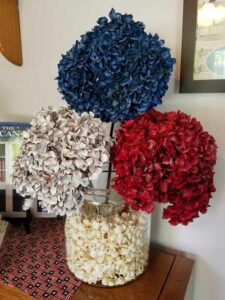 I decided to put the little test bunches of dried hydrangeas in a little white milk vase for another small bouquet. 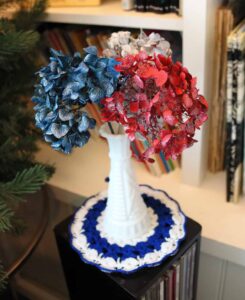 Do you like to use spray paint?  If you haven’t tried it yet, I encourage you to give it a try! 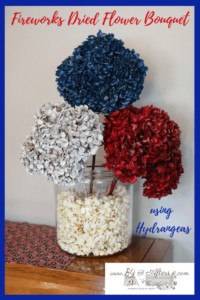 For another Patriotic idea using items found in nature, click on the picture below!